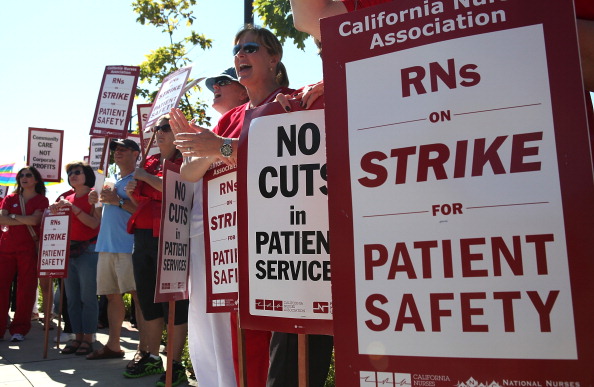 Breaking at In These Times:

On June 15, a day after a Service Employees International Union (SEIU) official asked labor leaders not to oppose a change to nurse-patient ratios, California Nurses Association (CNA) Executive Director Rose Ann De Moro sent a blistering e-mail to her colleagues: “It is a war, of that I am certain, and it will not be pretty.”

Questioning whether SEIU – United Healthcare Workers West (UHW) President Dave Regan “has any principles,” De Moro called him “dogged, arrogant and an enormous embarrassment to the labor movement.” De Moro, who directs both CNA and its national affiliate, National Nurses United (NNU), charged, “the hospitals believe that they have found a way to weaken the nurses and their union with Regan in their power, and this will lead to some pretty nasty scenarios for the nurses, patients, and of course the union.” (The e-mails were provided to In These Times by a labor source.)

Reading that e-mail – and the public invective that’s volleyed between CNA and SEIU since – it would be easy to forget that both unions are bound by a three-year-old peace treaty. And it would be fair to ask how long that “organizing partnership” – which has restricted CNA’s support for SEIU’s arch-rival, the National Union of Healthcare Workers (NUHW) – can survive. An interview with De Moro suggests that agreement’s future is in question, while previously unreported letters show the AFL-CIO rebuffing SEIU’s bid for a larger deal to freeze out NUHW.