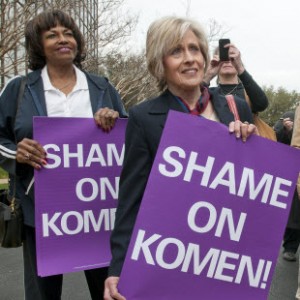 When news broke that the Susan G. Komen Foundation would cease funding Planned Parenthood, the backlash was fast, furious, and gratifying. Within days, Komen apologized and promised that Planned Parenthood could receive future funds. But some commentators were angry at Komen for all the wrong reasons: for “politicizing” women’s health, for failing to distinguish vanilla health services from the abortion “controversy,” or for dragging an avowedly apolitical organization into the muck of politics.

Contrary to those critics’ claims, women’s health is political, as the past weeks’ contraception conflicts have reminded us. As Amy Schiller wrote in The Nation, one of the virtues of the Komen controversy was the way it brought those politics—and Komen’s contradictions—to the surface. As Barbara Ehrenreich has written, Komen’s role in America’s breast cancer discourse has gotten worse as the culture around it has gotten better: When breast cancer was shrouded by silence, open, unapologetic conversation was a feminist feat. Now Komen hurts that conversation, contributing to a culture of cute and optimistic cancer that silences many women while letting corporations brand themselves conscientious on the cheap.

Here’s the rest.
Check it out.