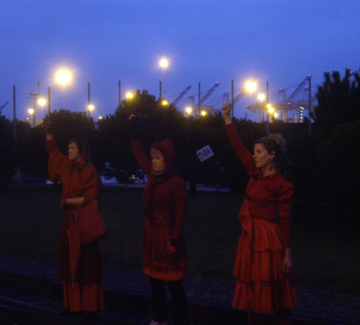 My latest Occupy Weekly for The Prospect:

On Monday, occupiers set out to shut down ports across the West Coast. Targets included SSA, which is largely owned by Goldman Sachs, and the Port of Longview, which multinational EGT is trying to operate as the West Coast’s only port without members of the International Longshore and Warehouse Union (ILWU). The actions, which shut down operations at Longview, Oakland, and Portland, were opposed by ILWU leadership. They led to intense debate among and between occupiers and unionists over tactics—who the blockades hurt, whether they’re worth the legal risks—and democracy, namely, how democratic the ILWU and the Occupy movement each are, and whether workers should have a veto over actions where they work.