I tried to do some mathematical analysis (which Aaron and you can check). In addition to the data points themselves, I used two additional pieces of information:

1. Six Feet Under is your favorite show (I think you told me this previously), and
2. You prefer Law and Order to Mad Men

Based on that, my estimate is that your Watch Preference Rating = (1.5 x Quality) – (Effort). There may also be a minimum Quality threshold for inclusion, although I’m not sure about that.

I’m assuming that the formula is constant throughout, which may not necessarily be true. The most challenging case is Modern Family, which scores very close to Six Feet Under, and higher than West Wing (w/Sorkin). Of course, I can’t be sure how precise your coordinate placements are.

I think my Dad is on to something. (Yes, I do stand by Six Feet Under as the best TV show of all time, despite all the objections raised on facebook) I went ahead and charted the same data points against the 1.5X = Y baseline he suggested and here’s how it looks: 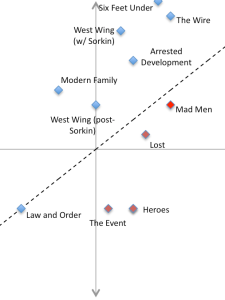 It was tempting to tweak a few of the placements on the graph, but I restrained myself. Maybe this should really be some kind of logarithmic chart to reflect how much more important Effort is relative to Payoff when the Payoff is low as supposed to high – Effort is much more likely to make me watch, for example, Law and Order over Heroes than to make me watch Modern Family over The Wire. Thoughts?

Meanwhile, let the record show it’s been exactly two weeks since Zach promised (on Twitter) “a response to your positivist rational choice tv modeling as soon as I turn in grades tomorrow.” Anticipation is building.